One of America’s most famous residents has just arrived in Britain, happily unaccompanied by petitions for and against.  Grant Wood’s painting American Gothic has made a rare trip across the Atlantic to star in the Royal Academy’s much anticipated new show, ‘America after the Fall:Painting in the 1930s.’

Even if you’ve never seen the painting in its usual home in the Art Institute of Chicago you are likely to recognise it – Wood’s 1930 painting is perhaps the most reproduced of all American artworks, and certainly the most parodied, even making a guest appearance in The Rocky Horror Picture Show. Just write American Gothic into your search engine to see the weird and wonderful variants that come up. 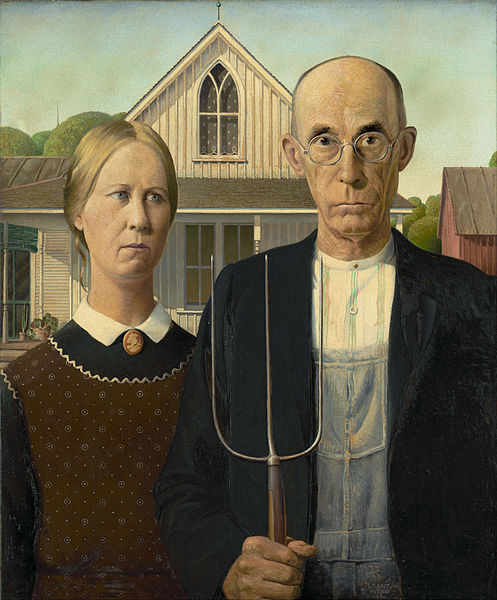 So what is it that makes American Gothic so compelling?  Not, I think, its execution; if I am remembering correctly from my student days in Chicago Wood’s neat but plain brushwork makes this one of the rare cases of a great artwork which is not much more impressive in the flesh than it is in reproduction. What makes American Gothic special is, rather, its combination of utterly lucid design and immensely striking subject matter, both qualities which work as well in reproduction as in the original. Wood’s picture is perfectly balanced, the care with which it is constructed epitomised by the alliterative echoes between the shapes of the pitchfork, the pattern on the man’s dungarees, the gothic window and the cactus on the porch.

And then there is the subject matter, so oddly fascinating that the image, once seen, is impossible to forget.  ‘Haunting’ and ‘uncanny’ are two of the words most often applied to American Gothic and uncanny is perhaps the one that fits it best – uncanny in Freud’s sense of something which is at once both utterly familiar and unfathomably strange. The couple seem so ordinary, so commonplace, and yet there is also something disturbing about them, about their long, pinched, expressionless faces, the hint of threat in the sharp tines of the fork, the overtones of religious repression lent by that improbable gothic window. The very title, American Gothic, suggests that dark themes of the sort explored in ‘gothick’ fiction might be lurking beneath the respectable facade.

Perhaps there is something else, too, which contributes to the uncanniness of the picture, something which might resonate with particular force for a British audience. It is well-known that Wood painted American Gothic shortly after a trip to Munich in which he became fascinated by fifteenth-century Flemish paintings. On his return to America he started to apply the precise brushwork, neat drawing and meticulous imitation of appearances he had seen in these works to his Iowan subjects. These traits are highly developed in American Gothic, and the word ‘gothic’ would itself have evoked the medieval world to which these Flemish painters were then thought to belong. Wood even borrowed actual compositions from his Flemish predecessors.  It is one of these borrowings, often noticed but insufficiently explored, which, I believe, helps to lend American Gothic its unique flavour.

I do not know whether Wood saw Jan van Eyck’s Arnolfini Portrait in the National Gallery in London during his trips to Europe. However, he must surely have known the work in reproduction, and it seems to me highly likely that he conceived American Gothic as an updating not just of early Netherlandish art in general, but of the Arnolfini Portrait in particular. 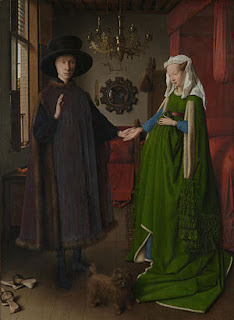 Placed side-by-side, we might first be struck as much by the differences between the two paintings as by their similarities.  Wood’s couple are outside, they are bare-headed, and the man stands on the right. But the more we look the stronger the echoes become. In both cases the couples, symmetrically arranged, stand on either side of a glass artefact which seems to bear immense significance, the gothic window in American Gothic, the convex mirror in the Arnolfini Portrait. Mr Arnolfini’s raised right hand is echoed by the pitchfork in the male farmer’s hand, while the spikey verticality of the fork itself has its equivalent in the Arnolfini’s chandelier.  Meanwhile, the still-life detail of the oranges on the Arnolfini’s windowsill is situated in exactly the same place in the composition as the cactus on the porch in American Gothic.  In both pictures the man looks out at us while the woman looks more askance, and in both the woman wears a belted dress and has her hair tightly combed. In both pictures the man’s face is unusually long and lugubrious. It even seems possible to me that Wood chose his male model, actually his dentist, for his passing resemblance to Mr Arnofini.

Once we’ve got our eye in, even the deviations from the original start to seem like deliberate comments on the differences between modern Iowan farmers and fifteenth-century European merchants.  The plain clothes and simple surroundings of the Americans are in stark contrast to the sumptuous costumes and costly possessions flaunted by the Arnolfinis. The Protestantism of the former is asserted as strongly by the chapel-like window of their house as the Catholicism of the Arnolfinis is asserted by the rosary beads on their wall and the scenes of Christ’s Passion around their mirror.  And the sensuality of Mrs Arnolfini’s body (she looks pregnant but her shape was probably meant to indicate her youth and beauty) is so very much more pronounced than that of the flat-chested, strait-laced farmer’s wife.

These differences and similarities make me think that in American Gothic Grant Wood was attempting not so much to copy the Arnolfini Portrait as to make a modern version of it.  Is it mere coincidence that the titles of the two works (the Van Eyck was then as now known as the Arnolfini Portrait) contain the same pattern of syllables and start with the same letter?  As the two works are now situated just a short walk from each other in London, it will be fascinating to see if they are as similar as I think they might be.


By Dr Harry Mount, Programme Lead in the History of Art and History