Some artworks just blow you away. I encountered this one in the National Gallery’s Beyond Caravaggio exhibition. I knew it was that sort of painting as soon as I saw it, and as I progressed round the room, carefully leaving it till last, I couldn’t help sneaking peeps at it over my shoulder. Standing at last in front of it I was mesmerised – I must have stared at it for as long as I spent in the rest of the exhibition. 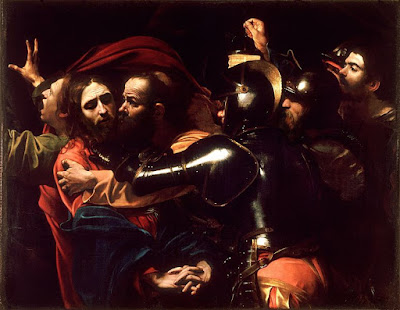 For the professional art historian moments like this grow increasingly rare. Only a certain number of works will have this effect, and as one grows older the chances of finding a new one are reduced. That Caravaggio’s Taking of Christ had such an effect on me is partially attributable to my unfamiliarity with the painting, recently rediscovered and now on loan to the National Gallery of Ireland in Dublin. And that makes these moments all the more precious, these moments when one is taken back to those first electrifying encounters with art that inspired one to study art history in the first place.

At these moments, one’s pretentions to being a coolly objective historian, subordinating one’s own emotions in favour of rigorous analysis, are swept aside. But rather than fighting these feelings it’s worth indulging and analysing them, because they may give some insight both into the works themselves and the impact they had in the past.

So what was it that so grabbed me about The Taking of Christ? Well, most obviously the lighting, the dramatic contrast of light and shade for which Caravaggio is famous. It is this chiaroscuro which gives the figures such an astonishing three-dimensional presence and which accounts for the powerful impression the painting makes from a distance.

But there’s more to it than that. Closer up, I became increasingly drawn in by Caravaggio’s skills as a storyteller. For starters, the picture is composed the wrong way round. In western culture pictures tend to be composed with the light and movement coming from the left, probably because that’s the way round we read. In The Taking of Christ, however, the movement flows the other way: six figures move from right to left, and only one faces the other way. So counter-intuitive is this that when I first saw the picture reproduced in a newspaper I was convinced that it had been accidentally reversed. But this reversal is done for a reason – the one figure heading against the flow is Christ, and by placing him thus Caravaggio makes us feel the overwhelming power of the forces heading inexorably towards him.

And what forces! Two hefty armed men, their gleaming armour the hardest, clearest thing in the picture, stretch grasping metalled hands towards Christ’s frail body. Ahead of them is Judas, his wrinkled, ugly face in stark contrast to the handsome visage of Christ which he is leaning forward to kiss. Christ’s mouth is slightly puckered and a little open – is he mumbling words of forgiveness or allowing Judas to kiss him on the lips? There is a disturbing, almost subliminal eroticism about the picture, amplified by the voyeuristic stare of the lantern-bearer who stands behind the soldiers.

Caravaggio’s final stroke of genius is to place the head of St John so close to that of Christ, but behind him and facing the other way, that it seems as if we are looking at one man with two faces. And while the face of Christ is resigned, that of John is shrieking in horror, as if expressing Christ’s own inner thoughts or our own feelings at the tragedy about to strike.

As an art historian, how much should I attend to these very subjective responses to The Taking of Christ? Certainly we should be sceptical of assuming that a seventeenth-century observer would be struck by the painting in the same way. My ‘period eye’, the world of visual references I bring to the painting, is very different from that of a seventeenth-century Roman. I am, for example, aware that I am highly susceptible to paintings which convey space through a powerful contrast of light and shade, perhaps in part because this is something modern artists have decided we can do without.

But perhaps my exaggerated responses to chiaroscuro are not so very different from those of an observer from the seventeenth century, for whom it would have been as much a new technique as it is now a lost and forgotten one. And is it not possible that Caravaggio was deliberately using the narrative devices I have been discussing to ensure that his picture had the same devastating effect on its first viewers as it had on me? Seventeenth-century painters were working increasingly for the galleries of private collectors and they would have known that their works would have been hung alongside those of other artists. Caravaggio’s Taking of Christ was painted for just such a collector, Ciriaco Mattei, and it would not be surprising if he chose to compete with Mattei’s other artists by showing off the chiaroscuro and story-telling which he had lately used to such devastating effect in his painting of the Calling of St Matthew for the church of San Luigi dei Francesi in Rome.

As art historians we must be very careful how we use our intuitive personal reactions to works of art - all too often they can lead us into anachronisms and misunderstandings. But these perceptions can also open up areas of research and interpretation which might lead us to insights of genuine historical validity. To ignore them is, moreover, to ignore what brought us to the study of art in the first place, the sheer pleasure of looking at works of art.

Dr Harry Mount, Programme Lead in History of Art and History, and currently working on the controversial quality of minuteness in the visual arts in Britain between 1660 and 1830.