What's in a Bruegel? Not a 'H', according to Jonathan Jones

One of the things people often ask is ‘how exactly do you spell Bruegel: is it with the “h”? or without?’ Truth is, it’s both. Bruegel signed his name both ways, and, in his early career, there were other spellings besides those two main ones. In fact, if you wanted to be precise – and a bit of pedantry can go a long way – you could rephrase the simple question ‘is it spelled with the “h”? or without?’ as the much more cumbersome: ‘so is with the “h,” or without? but what about the “u”? should I include a diaeresis over the “u”? or is it a macron that I need?’ And, to be honest, it’s not just a matter of how it’s spelled, because there’s also the matter of how Bruegel styled his signature: is it lowercase, in italics? or is it uppercase, with all sorts of other idiosyncrasies thrown in for good measure (which letters should be given as a ligature, for instance?). For in the corpus of autograph paintings and drawings by Bruegel, all of these varieties and more are encountered: from ‘brūeghel,’ to ‘brueghel,’ to ‘BRVEGEL’. (This, by the way, is to say nothing about how people outside the Netherlands coped the artist’s name – to Italians, for instance, Bruegel’s Dutch name was not only a bit tricky to spell but also, I guess, difficult to pronounce, and so we find yet more variants: the Bolognese doctor Scipio Fabius, for instance, plumped, in 1561 and again in 1565, for ‘Petrus Bruochl’.)

What this all means, in reality, is that Pieter Bruegel willingly played around with how to spell his own name. In early works, from the 1550s, we find him using variants on the ‘brueghel’ type of signature (lowercase, in italics, often with the “h,” with all sorts of other variations); then, in about 1559, he decided to adopt, with greater consistency than before, the now more familiar form: ‘BRVEGEL’ (usually uppercase, sometimes with the “V” and “E” in ligature, and that pesky “h” now eliminated). Here’s how some of those signatures actually look in a few works by the artist (1. the 1556 drawing for the Big Fish Eat the Little Ones; 2. the 1559 Netherlandish Proverbs; 3. the 1559 drawing of Charity): 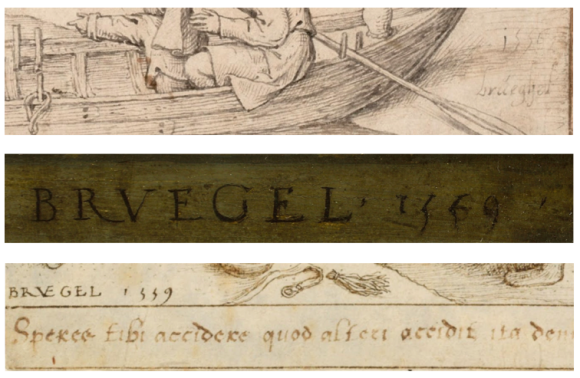 It’s stating the obvious, but what this shows us is that Bruegel couldn’t quite make up his mind when it came to spelling his name and signing his works. Up until about 1559, that is. For from that date, he went as ‘BRVEGEL’. And the reason for this change is a simple one: for ‘BRVEGEL’ has a more Latinate feel than the decidedly Dutch ‘brūeghel‘ and its variants. The signature change was, in other words, about cultivating a particular image: the Latinising, or “Latinisation,” of the name signalling the artist’s social, cultural and intellectual pretensions. (If proof is needed, we can just cast about almost at random in Bruegel’s milieu and find other examples of people doing exactly the same thing: ‘Domenicus Lampsonius,’ to take just one example from Bruegel’s extended circle, is a Latinised version of ‘Dominique Lampsone’.)

That to me seems to be the most plausible explanation of what’s going on here. But, whatever the historical realities are, the ‘is it with the “h” or without’ cliché provided a nice tagline in Jonathan Jones’s recent article in The Guardian on the, in my view ill-conceived, subject of which Brueg[h]el matters; or, put in another way that comes closer to what Jones actually thinks, which Brueg[h]el was any good?

His article was prompted by the upcoming opening at the Holburne Museum in Bath of a new exhibition: Bruegel: Defining a Dynasty, which is the first exhibition ever mounted in the UK on the Brueg[h]el dynasty. I’ll be giving a lecture there in March, on Pieter Bruegel the Elder’s (that’s the Bruegel-without-the-“h”’s) Blind Leading the Blind and its copies. Jones, though, doesn’t think that such an exhibition is worth having, for ‘the only Bruegel worth bothering with is the one whose name is spelled without the “h,” ‘ which is to say, Bruegel the Elder. The “other Brueghels,” namely Bruegel’s sons Pieter Brueghel (usually called Pieter the Younger, to distinguish him from the father) and Jan Brueghel (usually called Jan the Elder, or “Velvet Breughel,” to distinguish him from his own son, Jan Brueghel the Younger … ) are, in Jones’s view, second-rate painters, scarcely worthy of being the focus of an entire exhibition. He simply can’t see why ‘British museums and art dealers such as Christies, which staged a Brueghel show in 2014, [are] so obsessed with these lesser painters?,’ the “lesser painters” in question being the Brueghels with the “h”.

As we’ve now seen, it ain’t quite that simple: as I said a moment ago, a bit of pedantry goes a long way, so let’s just remember that the Elder Bruegel also had the “h”. But, the bigger point here concerns Jones’s idea that Bruegel the Elder’s children produced pictures that are inherently or automatically inferior to their faither’s: Bruegel’s genius produced masterpieces; the Brueghels’ servility produced copies, feeble pastiches, or else pretty inoffensive still lifes: 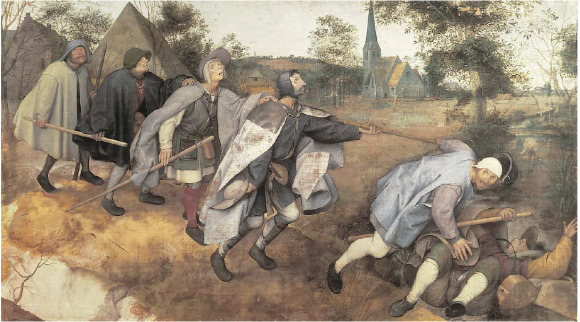 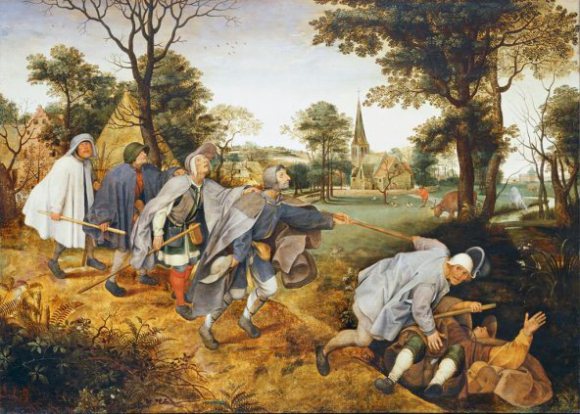 Brueghel with the “h,” Blind Leading the Blind 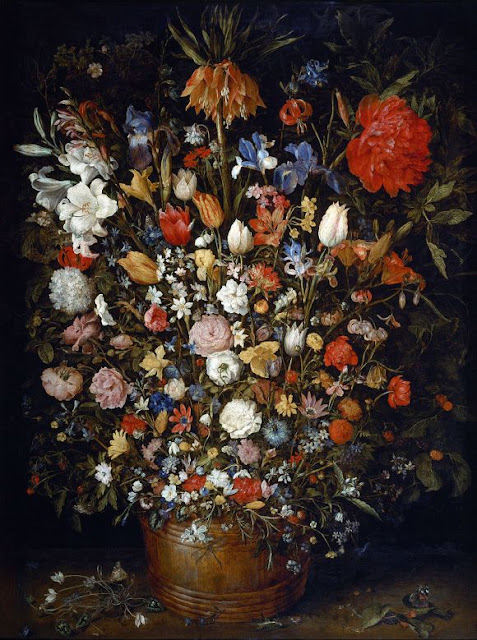 Jan Brueghel the Elder, Flowers in a Wooden Vessel, 1606/7; Kunsthistorisches, Vienna
This is the sort of thing you will have read years ago. And it was said especially often of Pieter Brueghel the Younger, who, in comparison to his brother Jan (whose originality has never really been questioned), has always tended to be thought of as being a totally uninventive, totally servile imitator and pasticheur of his father’s art. But is that really true? Consensus now is that it’s not: Brueghel with the “h” also produced pictures according to his own capacities of invention and artistry. And what he produced, apparently without recourse to an existing prototype by his father, is, in my view, not only good (whatever good means … ) but is also interesting for all sorts of reasons.

But, be that as it may, we can or should object, I think, to the snobbish dismissal of Pieter Brueghel the Younger’s activities as a copyist. All the best artists copy and always have done, and might you not say that Brueghel the Younger’s commercial savvy is something to be applauded: clearly he identified a market demand for Bruegel’s and Bruegelian pictures, which he seized and capitalised on, and clearly made a living for himself. If that makes a man feeble … then …? What’s at stake here, I guess, is how you define greatness in an artist anyway. If absolute originality is the key criteria, then we’re always on shaky ground, because what even is artistic originality, exactly? How is originality defined? And how can we ever be sure that something is absolutely original in the strict sense? (Roland Barthes had thoughts on that matter, on the tyranny of the author-genius’s supposed originality; and even Michelangelo’s inventiveness is best understood as a process of assimilative emulation, according to which he took pre-existing artistic and literary ideas and then put them all together in inventive ways — so, is that originality?) Besides, why can’t commercial success be a marker of greatness? (The idea that art historians should only be interested in seeing greatness in art produced only by artists who take pride of place among the pantheon of artist geniuses died out, rightly, a long time ago … art history students are habitually taught nowadays to “difference the canon”.)

For me, the lives and works of the Brueghels with the “h” are just as interesting as the life and work of the Bruegel without the “h”. They might be interesting for different reasons; but different, surely, isn’t the same as being “less good than”.

By Dr Jamie Edwards, Lecturer in the History of Art who researches the art of Pieter Bruegel (c.1526-1569)