Academics of eleven different nationalities gathered for a symposium to address the historical links between alcohol, psychiatry and society (Convened by Professor Waltraud Ernst, Oxford Brookes University, and Professor Thomas Mueller, University of Ulm/Centre for Psychiatry, Suedwuerttemberg Ravensburg). We learned that definitions of excessive drinking, drunkenness, alcoholism, and addiction varied across national contexts and that what was an acceptable – or even desirable – level of drinking in one culture, was considered problematic in another. Alcohol could be a sign of civilisation or individual status; it could be perceived as a medical treatment as well as a poison; and as a source of tax revenue or mental degeneration. 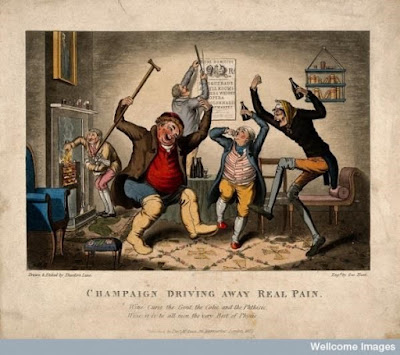 The symposium took us from the “gin craze” of eighteenth-century London to the streets of fin-de-siècle Paris, where drunk horses, dogs and cats made public nuisances of themselves, and onto post-war Japan, where a drinking culture developed despite the inability of the Japanese to metabolise alcohol effectively. The complexities of alcohol in the colonial settings of Algeria and Nigeria were addressed, as were the deliberations of early twentieth- century Greek psychiatrists who were divided between those who condemned alcohol for its adverse effects on health and those who recognised its value to the Greek economy. We heard about drunk Irish asylum nurses in the nineteenth century and the use of alcohol to build up the strength of women suffering from puerperal insanity. A variety of approaches to the treatment of alcoholism were discussed, from the administration of LSD to work therapy and self-help groups.

French psychiatrists, who recognised the link between “lunacy” and “inebriety” in the late nineteenth century, propagated the belief that alcoholism was inheritable and would ultimately lead to the degeneration of society, thus fuelling anxiety about mental and physical degeneration across the continent. By the end of the century even moderate drinking was frowned upon by the German state. In the USSR and communist Czechoslovakia, alcohol was believed to compromise a citizen’s ability to work and to threaten productivity.

The papers highlighted the influence of transnational networks in terms of responses to the social and individual problems caused by alcoholism, but they also revealed that alcohol can be perceived very differently in different national contexts and cultures.