The Witchcraft Exhibition at Ravensburg: A Review 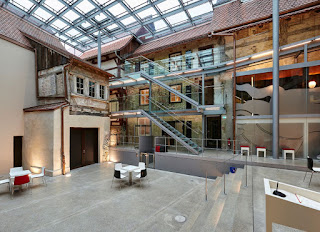 The municipal museum of Ravensburg (Baden-Württemberg, Germany) is currently hosting a major witchcraft exhibition. ‘Hexenwahn 1484. Frauen auf dem Scheiterhaufen’ (‘Witch Craze 1484. Women at the Stake’) is the somewhat curious title of the event that includes the exhibition itself, a series of public lectures, and the publication of a collection of essays about the witch hunts in Ravensburg and the surrounding Lake Constance area.

Ravensburg is clearly a good place for a witchcraft exhibition, since it has largely escaped the air raids of WW2 and large parts of the old town centre are still intact. A number of buildings mentioned in the Ravensburg witch trials therefore still exist. The former imperial free city of Ravensburg, one of the more affluent semi-republican city states that had flourished in South Germany in the late Middle Ages and experienced a slow but steady decline in the early modern period witnessed some of the earliest German witch trials.

The municipal museum ‘Humpis Quartier’ is a unique place that would be well worth a visit all by itself. The museum is not really housed in a building. Rather, it houses itself in a number of late medieval buildings. The modern museum space integrates a courtyard and some old buildings into a complete new system that is artificial and yet seems to have grown organically out of medieval architectural roots. The symbiosis of ancient half-timber, rough masonry, concrete and glass is almost in itself ‘magical’. At times, the visitor may wonder where exactly in the architectural space and where in time he is.

The exhibition uses what is in Germany sometimes called the ‘taxi approach’ to the eternal problem of getting the general audience interested in a very specific academic question: You’ve got to pick them up where they stand. The visitors are greeted by three screens with videos that talk about modern concepts of the witch most visitors would be familiar with. The screens present witches in the popular imagination (long noses and red hair seem to be of the essence), literary witches (‘Faust’ and fairy tales), and the witches of the Southwest German street carnival (male mummers wearing grotesque wooden masks). In order to see these screens the visitors have to go through a comparatively dark and narrow corridor. This corridor leads into a big open space under a high class roof. 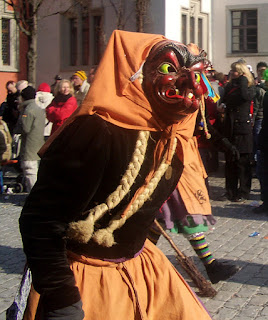 The room itself is a symbol: Here, the exhibition ‘illuminates’ and ‘clarifies’ matters. A series of reproductions of pictures with explanatory texts present the five elements of the demonological definition of the witch: A witch is a person who has made a pact with the devil (1). She (the witch is usually female) has sex with demons (2). She meets regularly with other witches. This so called witches’ Sabbath is usually not imagined as a ‘Black Mass’ but rather as a peasants’ feast (3). In order to join these secret gatherings quickly and without being seen, witches fly magically through the air (4). Witches use magic to do harm (5). This essential part of the exhibition is much too ‘talky’: The explanatory texts matter, the (not very well chosen) reproductions of pictures do not. It seems as if the organizers of the exhibition simply wanted to get the basics out of the way. The visitors cannot help a feeling of anti-climax. The fantastic open exhibition space and the three screens that made the visitor think about various concepts of the witch seem to be wasted.

The next room presents a number of most interesting artefacts: talismans and bits of paper with magical writing and symbols. While these are clearly the most interesting pieces of the exhibition, they have hardly anything to do with witch trials: All of these items belong to the huge area of folk magic. They were supposed to ward off misfortune, illness and any kind of evil influence, at times including witchcraft. However, contrary to popular knowledge, folk magicians were usually not accused of witchcraft. Nevertheless, the room does provide a glimpse into actual magical practices from the early modern period that the visitors will appreciate. 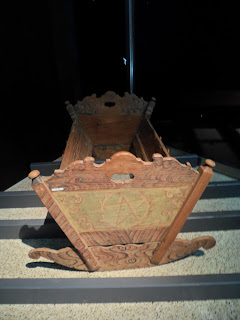 So far, we have learned little about the actual Ravensburg witch hunt of 1484. The next sequence of rooms is dedicated to it and to one of its key players, the witch hunter Heinrich Kramer. Kramer, also known as Institoris, was the author of the notorious demonological manual ‘Malleus maleficarum’ (Hammer of the Witches). A local clergyman invited Kramer to Ravensburg so that he could lead an investigation against witches in his capacity as papal inquisitor. Kramer preached sermons against witchcraft and tried to talk the people of Ravensburg into denouncing their neighbours as witches. However, the crop of actual trials was rather scanty. Six women ended up in court, only two of them were found guilty and executed.

The exhibition tends to overlook the basic fact of the Ravensburg witch hunt. Even though Kramer was an inquisitor, the court that tried the alleged witches was not an inquisitorial court. It was the municipal court of Ravensburg i.e. a secular, not an ecclesiastical court. Without the active support of the town authorities, Kramer would have failed utterly. The two women executed were persons of ill repute whom the people who mattered in Ravensburg saw as likely disciples of the devil. This exhibition fails to make the interrelation between Kramer, the local authorities and the inhabitants of Ravenburg sufficiently clear. Indeed, the selection of exhibits and the explanatory texts re-affirm the old misunderstanding that the inquisition was responsible for the witch trials. 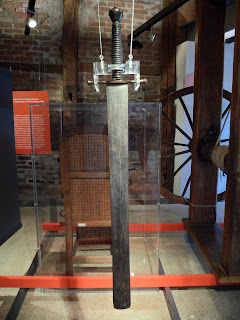 Visitors who have no prior knowledge are not likely to learn about the basic findings of witchcraft research, therefore. Almost all witch trials were conducted by secular authorities, not by the church. The driving force behind the witch trials were the so called common people, peasants and town people, not learned witch hunters. Instead of teaching this essential (and certainly somewhat disillusioning) lesson, the Ravensburg exhibition goes into details of individual trials and torture. The visitors are confronted with an executioner’s sword, and a torture device used for the ‘strappado’ the most common and most simple form of torture. Strangely enough, the organizers of the exhibition decided to include the so called ‘torture chair’ in the display, a rather ridiculous forgery from the 19th century that has a lot to do with modern sadomasochistic fantasies about the so called ‘dark’ Middle Ages but nothing at all with early modern criminal trials.

One display case presents an original text from a Ravensburg witch trial, interestingly one that documents an acquittal. Audio tapes play excerpts from trial records. A most helpful map identifies buildings and places connected with the witch hunts in Ravensburg: The visitors may continue their tour outside of the museum and go to the actual places that can still be found in today’s Ravensburg. These include the Green Tower where the alleged witches were imprisoned and a nice residential neighbourhood near the town centre, formerly a bit of woodland just outside the city walls where the witches’ Sabbath supposedly took place. This is clearly relevant and important. However, the exhibits do not stress the big inconvenient truth that the local authorities - not just the learned outsider Kramer - were responsible for the Ravensburg witch hunt.

Kramer used the experiences he had made in Ravensburg and other places in the German South when he wrote his manual for witch hunting, the ‘Malleus maleficarum’. The point of the book was to convince secular authorities that they should take a more pro-active stance toward the alleged threat of witchcraft. One early modern copy of the ‘Malleus maleficarum’ is on display. A series of panels without any original exhibits informs the visitors about Kramer’s further career and witch hunts that took place in some South German principalities. The last room of the exhibition confronts the visitors with the contemporary witch hunts that are taking place right now in large parts of Africa. Many experts agree that one of the main factors that hinder the further economic and political development of African societies is the fear of witches and actual witch hunts. There are a number of informative texts and photographs, but no original exhibits whatsoever.

The Ravensburg exhibition is highly informative. Visitors with little or no expert knowledge will learn something about the history of the witch hunts. However, some the explanatory texts are clearly misleading. There are too many of these texts and not enough original exhibits. It would be highly unfair to compare the Ravensburg exhibition to the big historical witchcraft exhibition in Karlsruhe in 1994, clearly the best one so far, or even to those in Berlin 2002 and Speyer 2010. The municipal museum of Ravensburg simply does not have a million-Euro budget to spend on an individual exhibition. Still, it would have paid to invest just a little more time and effort into the exhibition. The wonderful historical sights of the Lake Constance area are always worth a visit. So, if you go there this summer anyway, make sure to include the Ravensburg witchcraft exhibition in your itinerary.


The special exhibition about witchcraft ‘Hexenwahn 1484. Frauen auf dem Scheiterhaufen’ is on display till October 3, 2017.

Review by Professor Johannes Dillinger, Historian of Witchcraft and Magic