The Dragon as a Household Spirit: What does it look like?

In a number of witch trials we encounter the idea that a mysterious magical being called dragon (Drache in German) brought witches money, butter or grain. The dragon simply spat out money, milk or other goods when it had reached the house of its master or its mistress. 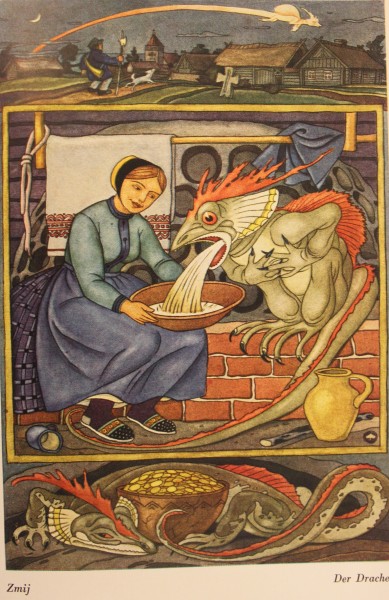 A modern picture of the dragon as a household spirit by Měrćin Nowak-Njechorński: The demonic being has turned into a fairy tale character.

The belief in the dragon explained – though in an entirely negative way - why some householders had more produce or more money than others.

It is surprising that a number of people in early modern Eastern Germany, the west Slavic areas or the Baltic actually claimed to have seen a dragon. They said that they had observed a dragon flying over the night sky. This is even more remarkable because almost nobody ever claimed to have seen a witch flying on broomstick.

At least from the middle of the seventeenth century onwards, scientists explained the dragon sightings as meteorites. Of course, this explanation made no impression on the village level or in the court room. It is not enough for historians to explain the belief in the dragon as a somewhat quaint though entirely wrong interpretation of a natural phenomenon. The social context matters. Witnesses in witch trials said time and again that they had not only seen the dragon flying over the night sky, they claimed that it had flown into the house of a certain person, sometimes through a window, sometimes through the chimney. Any person who was said to receive visits from a dragon was supposed to be a witch. In the words of a witness of a Bavarian witch trial from 1670: “The Drache had come flying often and at various times into the house of the defendant’s father and thus the general suspicion had been voiced that the culprit could not be free of witchcraft.” Thus, sightings of dragons could lead to accusations of witchcraft.

We may safely assume that at first people who seemed to do better than their neighbors attracted some negative attention. Their economic success invited suspicions of witchcraft. These suspicions made the villagers ‘see’ the dragon fly into the house of alleged witches.

Professor Johannes Dillinger, Professor in History, among whose many research interests are the history of Witchcraft, Magic, and Folk Religion.