I work on the history of modernist architecture and design in inter-war England. I’ve long been interested in moving away from the standard narratives about this, which have tended to focus on individual practitioners, and which tend to lament the tardiness of the English modern movement and to equate it solely with the work of émigré practitioners. Instead, my work has shown how from the early 1920s onwards, there was much debate in England about how the country might be re-formed and the new types of architecture that might help facilitate this. I’ve looked at the networks of people who shared these ideas and the coming together of clients and architects which enabled transformative environments to be created not just in the domestic sphere, but also in arenas such as housing and education. I’m also really interested in the ways these ideas were promoted – through media as diverse as architecture periodicals, radio talks, film and books –and how this created what I call ‘narratives of modernity’ that embedded these ideas more widely, creating a progressive consensus that manifested itself after 1945 in the architectural forms of the Welfare State.
Another key area of interest, and one that often intersects with my work on modernism, is the ways in which women have contributed to the formation of the built environment. This has been a key preoccupation in architectural history for the past 20 or so years, and I’ve been at the forefront of an impulse that has favoured expanding our understanding of what constitutes the design process rather than pursuing a quest for ‘great women architects.’ So I’m really interested in women who’ve written about, for example, new forms of domesticity, campaigned from better housing, or been the clients of radical projects and who’ve played a formative role in their creation.

Why did you choose these subjects ?

As an undergraduate and then a Masters student, I had developed 2 main interests – modernist architecture (especially in the UK) and in re-thinking art and architectural history in the light of the feminist approaches which had really started to take hold when I was doing my BA in Art History. I can pinpoint exactly when I found a subject that enabled me to move these interests into a sustained research career. I was looking at an article on a key modernist project – Kensal House – which was completed in 1936 and noticed that the attribution of the project was rather an unusual one 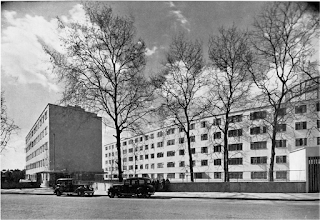 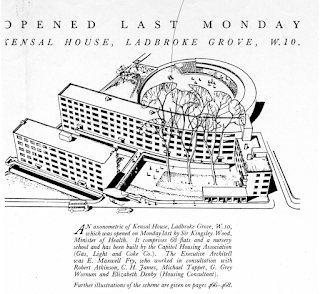 For a start it listed a number of individual architects (rather than one only, or the name of a practice, which would have been more typical) and then, at the end, was the name of a woman (the architects were all men) who was described as a ‘housing consultant.’ I was already really interested in Kensal House because, as an early example of modernist social housing, it was always featured in histories of English modernism but no one ever went into detail about it. In particular, it was the attribution line that intrigued me. Why were all these people listed? Who, I wondered, was Elizabeth Denby, and what was a housing consultant? No one had bothered to ask such simple questions before. I did, and it led me to a study of a fascinating individual in Denby who played a major role in developing modernism in England but who was not an architect, and who, despite being very well-known and much admired in her day, had been ‘disappeared’ from history. I wanted to put her back, but in a way that changed the nature of that history. 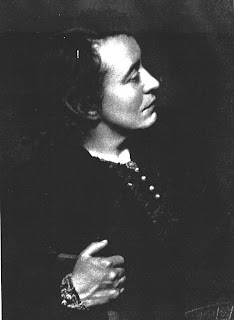 In this respect I had a lot of help from Denby herself. She left very few personal papers so I had to re-create the environments from which she emerged and in which she practised - the networks of people with and from whom she developed her ideas about housing and design – in so doing it became apparent that to think about architecture as the work of one single individual was utterly simplistic. The sort of projects with which Denby was involved, like Kensal House, were formed by – among other things- a client’s (the Gas,Light and Coke Company) need to promote its goods and services and itself as a modern enlightened corporation; an evolving politics of housing which now emphasised slum clearance and inner-urban regeneration; a network that linked Denby to a local employer in an area in which she’d worked as a housing campaigner in the 1920s (north Kensington) and her ability to steer a project to embody her own philosophy of housing. The latter she promoted both through buildings like Kensal House but also in her influential book, Europe Rehoused, which was published in 1938.

What makes your research different?

In many ways all my writing since then has sought to simulate this  idea of architecture as an ongoing process of being made – whether I’ve been writing about Denby or inter-war modernism more generally (like in my 2007 book Re-forming Britain). I’ve been concerned to show how networks of people and ideas and circumstances intersect to make our built environment and then how those environments continue to evolve through their use, and their mediation in the press and so forth. Most recently, I’ve taken these ideas to a slightly earlier period and place – early 20th–century Edinburgh – to explore how a range of women reformers transformed the everyday lives and environments of the women and children who lived in the slums of the city’s Old Town. It’s been fascinating to document the way women doctors, kindergarten teachers and housing reformers worked together to effect change and how their contribution to reform has been sidelined by the much-better known (and really rather over-rated) Patrick Geddes.

Womanliness in the Slums: A Free Kindergarten in Early Twentieth-Century Edinburgh 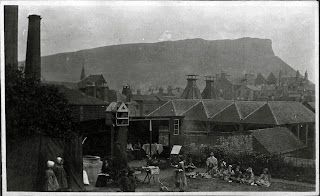 My next project takes me back to the inter-war period: From Networks to Receivers – Material and Spatial Cultures of Broadcasting in inter-war England will be a history of the design of BBC Broadcasting House (1932) and the wireless sets through which its programmes were heard. I am privileged to have been the recipient of one of the University’s Research Excellence Awards, which will support the writing of book manuscript.

Dr Elizabeth Darling is Reader in Architectural History and teaches on the History of Art programme at Oxford Brookes University.