On Tuesday 11 and Wednesday 12 April, I spent two days at Yale University in Connecticut. As one of the world’ best universities, and a key centre of research and teaching in the United States, it was an excellent vantage point from which to take the temperature of American Higher Education – and especially, as a British historian myself, in terms of US views of both British history and contemporary British politics. Invited by Yale’s Centre for International Security Studies to speak to both faculty and students, it was a fascinating visit that helped me to both sharpen my research questions and to see how others perceive the UK’s modern history. 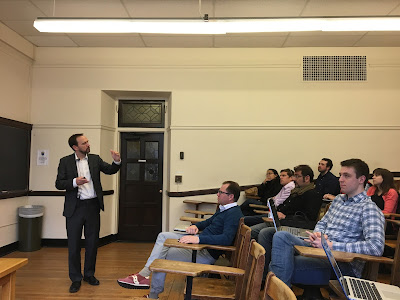 As the United Kingdom prepares to leave the European Union, and now enters yet another election campaign, clearly many Americans were very interested to hear and talk about the situation the UK finds itself in. What I found most obvious was a puzzlement that Britain should chose to leave the EU, but perhaps more deeply an uncertainty as to where Britain stands – diplomatically, politically, even culturally and ideologically.

On the first day of my  visit, I helped take an undergraduate class, comprised not just of History students but drawing participants from subjects as diverse as Political Science and Computing, entitled ‘War at Sea in the Age of Sail’. Together with Dr Evan Wilson, who once taught with me here at Oxford Brookes as an Associate Lecturer, we looked with the students at different visions of Britain’s foreign policy in the late seventeenth and eighteenth centuries: a so-called ‘blue water’ policy, or a European engagement. Nothing could seem more apposite in terms of present-day choices, and the students wanted to ask about the parallels with British diplomacy right now: to talk about trade, national self-image, and foreign relations, especially over Gibraltar, a running crisis at the time.

I then gave a paper to the ISS Brady-Johnson Colloquium in Grand Strategy and International History, entitled ‘Is the Sea Still Swinging into View? Contemporary British History and the Maritime Turn’. In this I attempt to show how the uncertainties stalking modern British politics have been transmuted into the way in which we think about Britain’s seagoing past: how modern concerns over networked economies, regional and continental trade blocs, gender and identity politics, and concepts of moveable, mutable space have fed back into the ways in which we perceive Britons’ engagement with the wider world. The questions were sharp, wide-ranging, and hard to field, mainly focusing on the way in which the British imagination lost touch with the oceanic emphasis that would have seemed second nature to most Georgian or Victorian Britons: again, the parallels with today’s debates about British as a ‘global’ or ‘European’ power were not hard to see.

On the Wednesday, I gave a lecture on Britain’s Brexit vote, trying to draw out the wider cultural, geographical, political and demographic issues that helped to bring about Britain’s ‘Leave’ vote. Here I argued that this decision was not primarily economic, but cultural – a protest against rapid change in and of itself, and (in England at least) a revolt of small towns and ‘provinces’ against London and other big cities. The audience were particularly interested in the parallels with the election of President Trump in the 2016 US Presidential election, as well as the emergence of so-called ‘populist’ movements across the developed world.

Overall, what was so noticeable about the reactions in my teaching session, and at my two talks, was the lack of clarity about Britain’s modern role in the world: is it a free-trading, ocean-going, globalised power, or a more ‘normal’ mid-ranking regional nation-state? And how do Britons now see their national past in the light of those dilemmas and choices? As a country that – as part of an Atlantic archipelago – looks inevitably outwards, or as a country with deep ties and interests in the heart of its own continent? It is no wonder that US students and lecturers are unclear, because Britain is very divided and uncertain about those issues too.

Glen O’Hara is Professor of Modern and Contemporary History at Oxford Brookes University. He blogs regularly, in a personal capacity, at Public Policy and the Past, and writes about current public affairs for a number of publications, including The New Statesman’s rolling politics blog, The Staggers.