The role (roll) of language – a different take!

This September, I took part in the Great Research Bake Off, a competition based on the idea that researchers would bring a cake that represented their research, and use it to speak to the public about what they do, as well as be judged for best presentation and taste. It was one of the many events organised for Oxford University’s 2017 Curiosity Carnival.

I’m a critical applied linguist. I see language as the raw ingredients with which our social worlds and identities are built. I am particularly interested in examining the part language plays in ensuring that certain ways of knowing and styles of reasoning, such as Western scientific objectivity, acquire dominant status around the world, at the expense of other ways of knowing.

Why ‘critical’? Put simply, this adjective which precedes ‘applied linguist’, symbolises a commitment to questioning the power dynamics behind the givens we take for granted in our everyday lives, in the hope of offering a more plural view of knowledge categories.

As such, I am a qualitative researcher who emphasises the non-measurable, partial and contextual nature of my findings, and the subjective part I play in analysing their meaning and significance. I am not interested in universal truths and generalisations, but in those often hidden living aspects of our beliefs and practices, that form the rich singularity of who we are and can be.

Very excited by this alternative to a conference paper, I wanted my Curiosity Carnival cake to represent recent close reading of undergraduate assessment texts, in which I identified instances of use of words which problematize the mainstream assumptions in academia and the wider world that language is a neutral medium used by researchers to present the results of their experiments. These snippets of student work also support the argument that the criteria such as ‘innovative’, ‘critical’ and ‘original’ by which we evaluate academic work relating only to thinking, or findings, or arguments –also relate to the actual ways of writing. In other words, writing itself allows for creation and expression of new knowledge and ideas: even scientific ones. 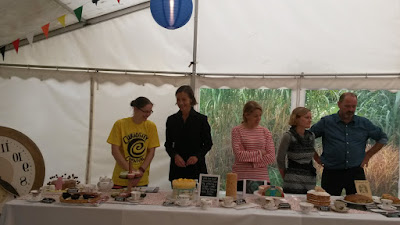 Accepting the limitations of my baking and icing skills, I decided to take a conceptual approach and present a straightforward Swiss roll vertically rather than horizontally, in order to lead the viewer step-by-step to understanding the part I see language and systems of representation playing in propping up dominant ideas about its status as a neutral medium. I should point out here that mine was the only conceptual cake, all others were wonderful, colourful, and very well crafted, literal representations of research projects, but then I was the only presenter not a scientist …

I began by asking ‘Who says a Swiss roll should be horizontal?’ Answer - all cookery books images, and videos present it as horizontal. If we order it in a restaurant we expect it be served this way. Horizontal Swiss rolls are an arbitrary socially agreed upon norm that has been reproduced for at least a century, which we all play along with.

Same thing for its name. We all agree to call it a Swiss roll, when all the historical evidence suggests it originates elsewhere, perhaps in central Europe, perhaps in the United States. Not confirmed. So whilst apparently it has nothing to do with Switzerland, we name it as if it did.

All this – the horizontality, the name - is a given we do not stop to question when we buy, make, or eat a swiss roll. An assumption we roll with (geddit).

I then related that idea to academic writing of lecturers and students, of which I identified two norms and commonsense understandings. My final step was to ask where these norms about the western rationalist way of writing about academic research and knowledge come from? Two quick answers were given:
These rather inflexible ways of writing are underpinned by basic assumptions about the nature of being human: I think therefore I am, cogito ergo sum.

I concluded by suggesting, as with Swiss rolls, so with academic writing, we are so blinded by our commonsense norms, we don’t see the hidden, creative dimensions of academic writing.

It was an amazing, exciting afternoon, and I got a lot out of my dialogue with all the different people who attended and wanted to know all about our research, and taste our cakes!