The labyrinthine meanings of race 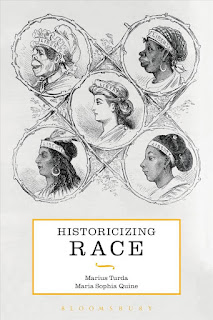 I've researched the history of eugenics for more than a decade, particularly in East-Central Europe and published a number of books on the topic. I have also researched the history of East-Central Europe more broadly, focusing on nationalism, fascism and biopolitics. I’m really interested at the moment in a global history of race and racism. This emerged from a 3rd year module that I taught last year when I was emboldened by my students to delve deeper into the labyrinthine meanings of race.

I have always been interested in the history of race, particularly in terms of its complicated relationship with philosophy, culture, science and politics. Historians must attend to specific historical traditions, but at the same time suggest the need for a new cultural and moral framework suitable for dealing with questions of collective, minority and individual identity in an increasingly polarised and divided world. In my teaching, I try to dispel the fears and insecurities our students may have when talking about race and racism in our society and in their communities. Tellingly, race as we now know it, in the twenty-first century, has not changed significantly by comparison to the sixteenth or seventeenth century, when it first emerged as a tool to interpret human difference. It is becoming clear that, despite historians deconstructing racism, racial narratives have proved to be enduring.

I am known nationally and internationally as a specialist in the field of racial studies and eugenics in East-Central Europe, a field I spearheaded through my publications, research networks and student supervision. More recently I began looking at broader geographical areas. In this work, I re-conceptualise the history of nation and race by exploring the plurality of global racial heritages that are forgotten or misplaced. In my latest book entitled Historicizing Race (Bloomsbury 2018), I suggest that a more nuanced historical and critical perspective on race is needed in order to understand its growing appeal to contemporary sensibilities. After all, Brexit has highlighted the broader crisis of national and collective identity which Britain and Europe at large are experiencing at the moment. In its current personification, racism is expressed in a political vocabulary that utilises strategies of coping with an identity, which allegedly is under threat. In this respect, we need to understand the appeal of race within its historical context, as many of the images used by politicians today are often recycled historical narratives, so popular in 1920s and 1930s, and, indeed, in the nineteenth century.