Back to the future: Trump and May, Reagan and Thatcher 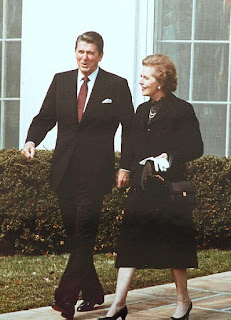 On Friday 27 January, an outsider and polarising American president, with a background in showbiz, enthusiastically welcomed a female British prime minister to the White House. Both came to office in the context of a national rejection of the status quo and a demand to prioritise their respective national interests. It was the first meeting between the new U.S. president, Donald J. Trump, and the British prime minister, Theresa May. We have been here before and there are comparisons - including those made prominently by Trump himself - with the relationship between President Ronald Reagan and Margaret Thatcher in the 1980s.


The Reagan-Thatcher relationship is feted as an example of the most special of Anglo-American relationships. Their proponents and opponents earmark them as political soulmates, committed to a marriage made in free-markets, tax cuts, and a Cold Warrior vow to stand-up to the Soviet Union. However, as in all relationships, there were quarrels and disagreements. Reagan was slow to publicly support Britain in the 1982 Falklands War and the 1983 American intervention in Grenada was a huge embarrassment to the Thatcher government. The prime minister was furious when Reagan almost agreed to total nuclear disarmament with Mikhail Gorbachev in their meeting at Reykjavik in 1986.

Trump and May’s first meeting was likely be a harbinger of the complexities of their relationship in power. This was certainly the case for Reagan-Thatcher. When Reagan welcomed Thatcher to the White House on 26 February 1981, both leaders publicly and enthusiastically promoted their commonalities in policy and shared purpose in office. Yet just as Maggie and Ronnie were indulging in their jellybeans in the Oval Office, the U.S. Treasury Secretary, Donald T. Regan, was assuring Congress that Reaganism would be different to Thatcherism. Likewise, the White House briefed the press on the differences between the two government’s economic policies. The Reagan administration would spend 1981 trying to ease the New York Times’ claim that ‘Reaganomics will produce Thatcheritis’. This balancing act between public diplomacy and a concern about economic programmes continued throughout the Reagan-Thatcher years. The Reagan administration did not want the president’s proposed tax cuts in 1981 to be rejected because of Thatcher’s struggling economy. In turn, the prime minister repeatedly asked the president to address the ballooning American budgetary deficit, given its negative impact on the global economy through high interest rates and subsequent undermining of her Thatcherite revolution at home.

Theresa May went to Washington, D.C. eyeing the prize of an Anglo-American trade deal that could be celebrated as a major victory for ‘Brexit Britain’. An Anglophile president, who is eager to show that he can transfer his ‘art of the deal’ from business to politics, hosted the prime minister. Nevertheless, just as public diplomacy and political cover defined the Reagan and Thatcher meetings, May, like Reagan 36 years ago, will continue to be aware of the domestic politics back home. She will not want to be too personally connected to such a polarising figure as Trump. After all, the British government daren’t allow fears to emerge that ‘Mayism will produce Trumpism’.


Dr James Cooper is a senior lecturer in History at Oxford Brookes University, specialising in contemporary American history. He was previously the twentieth Fulbright-Robertson Visiting Professor of History at Westminster College in Fulton, MO, and in May 2016 he held a fellowship at the Norwegian Nobel Institute.