Beyond Brutalism: Architecture, Citizenship, and Space as a way into 20th-century British Architectural History

A great privilege of academic life is the opportunity to convene with scholars in one’s field and share new research. Most recently, this took the form of the conference ‘Architecture Citizenship Space: British Architecture from the 1920s to the 1970s,’ that I convened with Dr Alistair Fair of the University of Edinburgh. Held here at Oxford Brookes on 15-16 June, it was funded by the Paul Mellon Centre for Studies in British Art, with additional support from the Research Fund of the School of History, Philosophy and Culture. 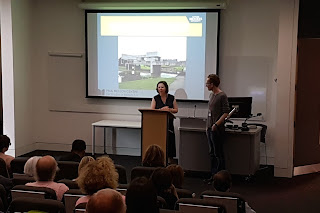 Re-thinking how we do architectural history

In convening the event we had a number of aims.  Central was to bring together excellent scholars – from early career to emerita professor - who are producing excellent work in the field of twentieth century British architectural history – and to give them an opportunity to share their research and enjoy a conversation about it.

More particularly, we wanted to bring together scholars who are working on that history in a particular way. All the work presented at the conference took as its starting point an understanding of architectural production in the widest sense, encompassing not only completed buildings and unbuilt projects but also texts and the media, clients, builders, and users. That is, we are all part of a turn in twentieth-century British architectural history away from primarily formalist accounts of style (we’re just a bit bored with Brutalism). This new architectural history – now beginning to consolidate itself - is rooted in the archive and asks how cultural production functioned as a vehicle through which to explore such ideas as modernity, identity and community. In essence, the material and spatial culture of architecture is conceived as a commentary on these ideas, whether by embracing or resisting them.

The conference began with a focus on the 1920s and 1930s, which, speakers argued, was the period when architects and others self-consciously began to re-evaluate the purpose and nature of architectural culture as Britain entered full democracy. This would be done through the creation of prototypical new sites (such as the Pioneer Health Centre, discussed by Elizabeth Darling), through architectural journalism (Jessica Kelly on the Architectural Review) or through a re-invention of the architectural profession, especially in the wake of the inter-war Registration Acts (Neal Shasore on the RIBA).

What emerged in these papers was the idea of the building, as the creators of the Pioneer Health Centre put it, as ‘an inter-facial membrane’: an active and dynamic set of spaces in and through which ‘publics’ could be or become modern.

Elizabeth Darling explored this idea through a consideration of the concept of the ‘Centre,’ and the examples of the Pioneer Health Centre, the Building Centre, the Housing Centre and the Community Centre. These addressed a number of publics – another key theme in this session. This might be a working-class public, as was the case at the Pioneer Health Centre, enabled to assume a fuller role in society through improved health care and access to birth control, or a more affluent, middle-class public who, through access to information about modern products for their homes at the Building Centre, could create domestic settings as modern as they were.

Speakers were careful to note the difficulty of the term ‘public,’ noting a tension between the intentions of middle-class/upper middle-class reformers, journalists, architects, and the audiences they addressed. Jessica Kelly’s paper showed how the Architectural Review  negotiated a relationship with a reading public from the late 1920s onwards, when it became a proselytiser for architectural modernism. From problematising a (middle-class) public (and equating femininity with poor taste in articles such as ‘The Architectural Consequences of Women’) and which thus needed to be instructed about the new architecture, she charted the emergence of an idea that the architectural press might collaborate with its readership in the advocacy of a specifically national form of modernism.

Neal Shasore showed how the architectural profession similarly sought to engage with a middle-class public through a new headquarters building (opened 1934) notable for its openness (in contrast to other profession’s more monumental and private institutional interiors) and a newly-founded PR committee: its aim to create the idea of architecture as a public service and the architect as indispensable in the formation of the commonweal.

This linking of the architect/architectural culture and the public realm; buildings as some form of setting for transformation; and more national or regional forms of modernism would find full expression in the reconstruction of Britain after the Second World War. Subsequent sessions explored their manifestation in the fields of education, urban planning, and the cultural sphere.

Educating the Nation after 1945

In this session speakers considered how the new Welfare State’s concern for citizens from cradle to grave, began with a massive school (and later university) building programme. Roy Kozlovsky showed how a concern for children’s emotional well-being (largely stemming from the experience of wartime evacuation) led to carefully designed, domestic scale, school environments, settings for a more informal education with the ultimate aim of creating the child as a (proto) ‘social democratic self.’

Catherine Burke picked up this theme of the school as an early training in democracy – so important to a nation reconstructing. She also demonstrated how a new understanding that all children were entitled to the best was manifested in how architects (now very much public servants) designed these new schools meticulously: from structure to fixtures and fittings. In such attractive settings children received an education in culture as well as the 3 Rs.

This nurturing was continued through to higher education buildings, the subject of Louise Campbell’s paper. Again, the state understood education not simply as a means to an end, but a good in and of itself; the university was a site to train a new generation of engineers, civil servants and so on, but more generally to enable generations to become cultivated citizens of both a modern Britain and a modern Europe.

Architecture Citizenship Space: Beyond the Academy

Discussion took a slightly different tack in our final session of day one, a roundtable to which we had invited the blogger Municipal Dreams (John Boughton); the Manchester Modernist Society’s Jack Hale, and Verity-Jane Keefe, who runs the Mobile Museum. 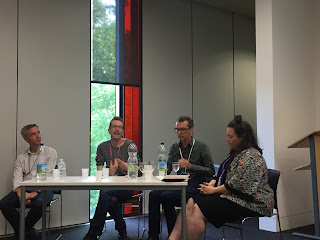 Working beyond the confines of an academic context, each engages with the architecture of the period under discussion with a particular emphasis on its lived experience and its enjoyment and appreciation. How often the architecture of the Welfare State (and indeed pre-war social architecture) has come to be dismissed and understood as a generic misstep in social policy, was a theme that quickly emerged. Thus work to remind a wider public and politicians that, for example, council estates are not anonymous agglomerations of housing, but Places inhabited by communities, or that Manchester’s modernist office blocks and highways might be important markers of a local identity, is a central activity of all our discussants whether through community workshops, blog writing or walks and publications. Emphasis was also placed on the importance of grassroots responses to local architectures versus the parachuting in of outside bodies unfamiliar with the particularities of a place.

Where and how to live

Day two saw our final sessions. In the first, new ideas of urban form and dwelling, as well as new methods of designing them, formed the subject of discussion. Otto Saumarez Smith explored post-war urban planning, favouring the concept of ‘urbanity’ as a lens through which to understand design rather than stylistc tropes like Brutalism or the New Empiricism. Urbanity – a term deployed by architects and sociologists working together – argued for higher-density city redevelopment that drew on the traditions of Georgian town planning to create urban spatial forms that retained the social relations of working-class communities but in much better designed and spatially generous surroundings.

Christine Hui Lan Manley considered a different form of urbanity - this time a more visual form - in her discussion of Frederick Gibberd’s work at Harlow and Hackney. Gibberd sought to blend local references be that to Georgian architecture in an urban context or vernacular in a more rural setting with the more usual tropes of modernism to again create decent well-designed homes and neighbourhoods.

Ruth Lang’s paper offered a parallel commentary on the development of modern ways of working through her discussion of the London County Council Architects’ Department’s method of design organization. She showed how small teams comprising not just architects but other specialists (including sociologists) worked communally on projects: experts dedicated to serving a post-war public that warranted - without question - the best of environments.

Finally, and in keeping with the theme that the post-war world required a cultured citizenry, speakers explored the nationalisation of culture from the mid-1940s onwards. Alistair Fair argued that for both Left and Right, the theatre was understood as a site in which all people could enjoy access to culture (as opposed to the less highbrow, and American, forms of culture such as the cinema). Through the Arts Council, successive governments in the 1960s and early 1970s supported the building of new civic theatres which, in their combination of performance with social spaces for mingling and eating, created sites of cultivated leisure. As Fair pointed out, the plays put on might not, however, always be to locals’ taste: in response to a play rich in its language, excused by its director as ‘idiom’, a woman complained ‘what you call idiom, I call filth.’

Reflecting the tensions in that letter, and also raised in the first session’s papers, that the intentions behind such projects were not always met on the ground with appreciation, Rosamund West’s paper outlined the London County Council’s policy of including artwork (usually sculpture) in its housing estates. This might be understood as a further echo of the policy of surrounding children in their new schools with well-designed furniture.  While some work was very popular, locals did not always appreciate the modernity of the sculptures commissioned.

Lesley Whitworth’s paper showed how a parallel organization to the Arts Council, the Council of Industrial Design (COID, founded 1944) similarly sought to foster an awareness of the importance of design and the designer in the formation of a modern Britain. This most certainly had an economic motive: the purchase of consumer goods would help the British economy and fill the homes of those re-housed in the estates designed by Gibberd et al. But, more particularly, as Whitworth noted, and reiterating the idea of the importance of the arts per se, the objects that the COID approved as examples of good design, were talismanic for those who promoted them, and those who bought them. They were signs of Britain’s and Britons’ modernity.

These papers were all delivered in an atmosphere notable for its friendliness and collegiality, and each session ended in useful and constructive discussion. We finished with the observation that having considered the historical moment when culture was seen as transcendant, rather than tied to measurable outputs, and that the provision of spaces and things through and in which individuals might negotiate their place in democracy was the goal of architects, designers, their clients and their users, we were rather a long way from our present reality. The theme of architecture, citizenship, space, seemed therefore especially timely.