Telling stories with the Census

I’m a quantitative historian. I like to know that I have a good stack of evidence to support the things that I say. My graduate students frequently have to endure scrawls of ‘is this representative????’ when they cite a particular individual, or a nice vignette, but I think it’s really important to know whether the stories that catch our attention in the archives were interesting one-offs, or a common experience.

But on the other hand, all of my research is focused on everyday lives of everyday people, and I very much do want to know what my numbers might have meant in terms of lived experiences. That’s the fun part of quantitative history: putting the ‘real life’ back in again. Of course it’s also its biggest challenge as numerical sources don’t often contain personal reflections, and we can’t assume that people in the past felt the same about any given circumstance as we do today.

It’s an approach I’ve used fruitfully since my PhD study of healthcare and survivorship among abandoned babies in eighteenth-century Europe. I spent a lot of time doing what was probably the most technical statistical work I’ve ever done (thanks to the expertise at the Cambridge Group for the History of Population and Social Structure, where I was based), working out what factors made it likely that some ‘foundlings’ made it through childhood, while others (very many of them, sadly), did not. However, once the analysis was complete, I felt it was important to return to what that might have meant for all those babies and young children, for the mothers who in all likelihood would never see them again, and for the institutional officials who looked after them (a telling note in a committee minute mentioned the problems that went with large numbers of four- and five-year olds returning from placements with country wet-nurses and never having encountered stairs before!). Some of this came from records like letters and minutes, but a lot of it is about simply thinking in more personal terms about the bald data generated for survival or regression analysis.

I’ve spent my summer busily interrogating another source that lends itself well to large-scale analysis: the British census. These have been taken every ten years in one form another (world wars excepted) since 1801, and I’m using the one recorded in 1851. Of course, many people use the census precisely to help them tell very personal stories about their own families. I’m doing something slightly different: I’m using it to reconstruct the households of Jews in several growing cities, in order to examine how a self-bounded and highly mobile population arranged itself in a time of huge economic and social change. In total, my database contains over 3500 individuals, arranged in 853 households across seven towns. It’s allowed me to examine whether Jews lived with family beyond the basic parents-and-children core; whether they employed Jewish servants (rarely – possibly because Jews didn’t work as servants very often); whether Jewish lodgers boarded with co-religionists, and whether they clustered together in the same parts of town. 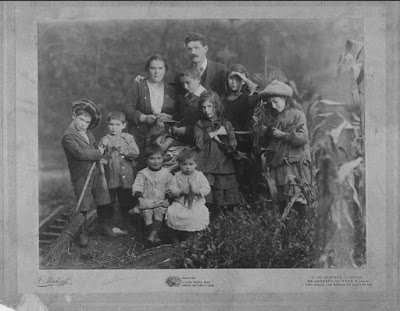 But, as ever, the bigger-picture perspective, with individuals bundled into statistical categories and variables, does also allow me to draw out something of what that might have meant in terms of family relationships. While many families and individuals lived without other relatives in their house or even the town, others were well connected. Jacob and Juliana Myers, for instance, who were living at 2 Bordesley Street in Birmingham in 1851, had a wide range of relatives on Juliana’s side of the family nearby (Jacob, like 40 per cent of my database, was born abroad, in Strasbourg, and does not seem to have had other relatives in Britain in 1851). Juliana, in contrast was a Brummie born and bred, and all seven of her siblings were also resident in the town in 1851. Her brother Isaac shared a home with their widowed mother, while siblings John, Emma and Henry lived together in a separate house. Being close by didn’t mean that family members necessarily saw or helped each other, of course, but Jacob and Juliana’s three year old daughter Sarah was staying in her grandmother’s house on census night, which certainly suggests that there were close and useful bonds at work. Information on birthplaces shows us that this was not a family who stayed put all their lives though – the Myers’ six children had been born on the south coast, variously in Lymington and Portsmouth. They were to remain physically close though: their son Joseph was living either next door to, or opposite, his widowed mother in the 1881 census.

We see another little glimpse of these sorts of family relationships in the household of the Simons family, also living in Birmingham in 1851, this time in Cleve Terrace. Here, the parents were actually absent on census night, leaving four children aged between 14 and 2 in the care of their grandfather, 76 year old Nathan Aaron. If only we knew a little more about what that experience was like! I have a similar yen to know more about the living arrangements of the 24 employees of Benjamin Hyam, a Jewish clothing manufacturer in Manchester, male and female, Jewish and non-Jewish, who all shared a residence at 35 Pall Mall. The house next door contained a similar mix of workers, enlivened by the presence of two prostitutes. Benjamin himself lived in Salford, with his wife, three daughters, two sons, a niece, and that rare addition: a Jewish employee, acting as a governess.

There is a limit to the details we can add back in to the census data without the sorts of personal reflections and diaries which become more common over time. However, my current project is showing that the household is a very fruitful level of analysis when it comes to combining numbers with stories. As I continue, adding in charity records and more sophisticated mapping techniques, I hope to be able to reveal much more about how the Jews of the mid-nineteenth century lived, intermingled, and assisted one another.

Note: the British censuses did not record individuals’ religions until 2011. The identification of Jews within the 1851 census has been carried out by a team of researchers and combined into a searchable database curated by Petra Laidlaw. It can be found at www.jgsgb.org.uk/1851-database. The note on the Myers family in 1881 is taken from there. My work enriches these data by returning to the census to recreate whole households, including non-Jewish members, and building in new measures of relatedness, geography and community ties.

This image is the Perkoff Family from the collection of the Jewish Museum London http://jewishmuseum.org.uk/search-collections?adlibid=1017&offset=0