Christina-Rauscher-Straße: The Story Behind a Street Name


The city of Horb in southwest Germany has named a street in honour of Christina Rauscher, a woman who helped to end the witch hunts in the entire region. Brookes historian Professor Johannes Dillinger discovered Christina’s extraordinary stories in the archives and brought it to the attention of the public.

In the early modern period, the city of Horb belonged to the county of Hohenberg. Hohenberg was just one of many petty principalities ruled by the Habsburg archduke of the Tyrol, even though it was more than 200 miles away from Tyrol’s seat of government in Innsbruck and a number of non-Habsburg states separated both territories. The archducal government in Innsbruck found it very difficult to exercise any kind of control over the far away and self-assured Hohenberg towns, including Horb.

The Luziferturm, Horb am Neckar, where witches were incarcerated 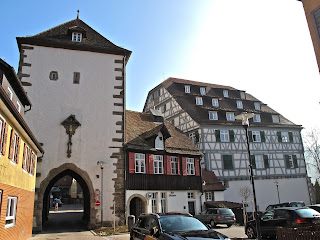 Left to their own devices, the local elites of Horb and the other Hohenberg towns orchestrated one of the worst witch hunts in southwest Germany: at least 438 witch trials between the 16th and 18th centuries. This was a staggeringly high number compared to the approximately 3,000 households in the territory. Only 7.5 per cent of the accused were men, while 67 per cent of the male and 85 per cent of the female defendants suffered the death penalty. (As a comparison, about 1500 witches were executed in all of Britain.) While the peculiar political situation enabled local elites to conduct mass witch hunts, the driving force behind the persecution were the so-called common people. Crop failure had let to the breakdown of viniculture in the region which in turn caused a complete re-structuring of the regional economy. Many people lost their livelihoods and social trust eroded quickly. In the words of a contemporary: The region that had been “known as the lard pit became the hunger pit.”

Christina Rauscher came from a very affluent family in Horb. Her father, who rather ruthlessly tried to improve his already outstandingly good economic position, engaged in protracted conflicts with the city council. It had tried to force Christina's father to close the brewery the successful merchant had opened as a side business because it had. bought such massive amounts of barley that it drove up the price for bread. Time and again he managed to make the Innsbruck government intervene on his behalf. Christina supported her father in these conflicts. From 1598 onwards, she was rumoured to be a witch. Several alleged witches denounced her as an accomplice. For a number of years, Christina avoided a formal accusation. She sued the local bailiff for slander and threatened the Horb town council with further interventions by the Innsbruck government.

What followed was totally illegal even by the standards of the 17th century. In 1604 Christina was surprised in her home by a mob, captured and incarcerated in Horb’s town gaol. Her husband Johann Rauscher, who remained loyal throughout the trial, did his best to free her, bringing official documents from spiritual and secular authorities that demanded the immediate release of his wife. The town council which tried to defend its authority because it wanted to make an example of Christina, ignored all attempts at intervention. She remained in gaol for almost a year and was tortured repeatedly. At the time of her arrest she had been seven months pregnant. She lost her child under the torture.  However, Christina never confessed. When she was finally released she was, as a contemporary source had it, “as weak as a small child.”

After regaining her strength Christina began a legal battle against Horb town council and the bailiff that lasted for the rest of her life. She managed to alert the Innsbruck government to the blatant miscarriages of justice that went on in Hohenberg witch trials. In 1607, the entire town council of Horb was ousted at the command of the government. The bailiff lost his position. A new law was passed that protected basic rights of witchcraft suspects. Two year later, Christina was given a private audience with the archduke. He authorized her to lead an official investigation into the miscarriages of justice in Horb – an unprecedented honour for a woman. The mass witch hunts in Horb and Hohenberg ended abruptly. The great wave of witch hunts that struck many other German territories in the 1620s did not reach the Hohenberg region anymore.

There can be no doubt that the alleged witch, Christina Rauscher, was instrumental in bringing to an end witch hunts in the entire region. Almost 400 years after Christina’s death in 1618, her hometown named a street after her.

By Schlaier (Own work)
[CC BY-SA 3.0 (https://creativecommons.org/licenses/by-sa/3.0)], via Wikimedia Commons