Medical Science in the Archive: the MSVA

In January 2018, Viviane Quirke gave the introductory talk for the launch of the digitised Medical Sciences Video Archive. The MSVA is a precious resource to historians of medicine carrying out research on topics as diverse as epidemiology, intensive care, obstetrics, anaesthetics, and palliative care. It also provides scholars interested in oral history with special insights into the culture and practice of British medical science in the second half of the twentieth century. 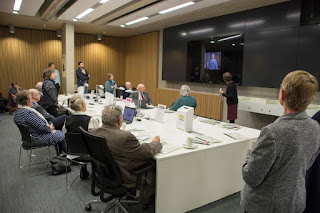 In 1985, the MSVA was founded by a collaborative agreement between Oxford Polytechnic and the Royal College of Physicians (with Prof. Max Blythe and Sir Gordon Wolstenholme as principal interviewers). After 1992, other national and international links were developed, including with the Association of Anaesthetists of Great Britain and Ireland, and the Royal College of Anaesthetists, leading to interviews with 11 important anaesthetists collected between 1995 and 1998. Then, in 1999 a Joint project was created between the School of Biological and Molecular Sciences and the School of Humanities at Oxford Brookes University (to transcribe and index interviews, to improve access to the collection). The work was carried out by Dr Carol Beadle and Susannah Wright, and was funded by a grant from the Wellcome Trust held by Professor Anne Digby of the School of Humanities. Finally, in 2016, Stuart Hunt of Learning Resources at Oxford Brookes University submitted a successful bid to Wellcome for a Research Resources award to fund the digitisation of the collection (now on RADAR).

So what is it? It is a collection of filmed interviews with 130 'leading figures in the world of medical and clinical scienc' talking about their lives and careers. These are, perhaps unsurprisingly, mostly men. However there are also some notable women, for example Professor Dorothy Hodgkin and Dame Cicely Saunders, in fields as varied as x-ray crystallography and palliative care (and many more), but also relating to policy areas such as health services administration, health education and health promotion, and science funding.

What is it for? In short: an oral history of the biomedical sciences. Using a definition from the Oral History Society, 'Oral history is the recording of people's memories, experiences and opinions.' Hence, it can be described as:
•       A living history of everyone's unique life experiences
•       An opportunity for those people who have been 'hidden from history' to have their voice heard
•       A rare chance to talk about and record history face-to-face
•       A source of new insights and perspectives that may challenge our view of the past.”

To illustrate this point, in her presentation, Viviane showed a clip of Max Blythe’s interview with Norman Heatley in Oxford on 28 Oct. 1987. Who was Norman Heatley? As Sir Henry Harris put it succinctly in 1998: 'Without Fleming, no Chain or Florey; without Florey, no Heatley; without Heatley, no penicillin.' Yet while Fleming, Florey and Chain jointly received the Nobel Prize for their work in 1945, Heatley's contribution was not fully recognized for another 45 years. It was only in 1990 that he was awarded the unusual distinction of an honorary Doctorate of Medicine from Oxford University,  the first given to a non-medic in Oxford's 800-year history!

The clip chosen by Viviane helped to demonstrate how oral history on the one hand, and video archives such as the MSVA on the other, could add to the existing literature on well known episodes in the history of the biomedical sciences like the discovery of penicillin, for they are:

The Brookes Special Collections house many other treasures, including the papers of Jane Doe (the professional name of Nettie 'Ada' Lewis - pages from one of her scrapbooks are shown here), who worked as a journalist in the 1920s and 1930s. These papers are currently being used by a Brookes History MA student, Hannah Greiving, for her dissertation on ‘Anxiety, Anger and Agency: The Change in the Emotions of British Women after World War I (1917-1930’, supervised by Professor Joanne Begiato.

If you are interested in finding out more about the Special Collections, and about the MA in History or History of Medicine at Brookes, why not join us for Open Morning on 13th of April?

Image credits:
Dr Norman Heatley OBE (1911-2004) as I have been given personal permission to use it (courtesy of the Sir William Dunn School of Pathology)
Jane Doe scrapbook (courtesy Oxford Brookes University Library)