My research focuses on contemporary American history in a broader context. In particular, it examines the transfer of political ideas and policies between the United Kingdom and the United States and how an issue in one country affects policy making elsewhere. In short, my research revolves around the interaction between domestic politics, foreign policy and policymaking. It has resulted in two books. 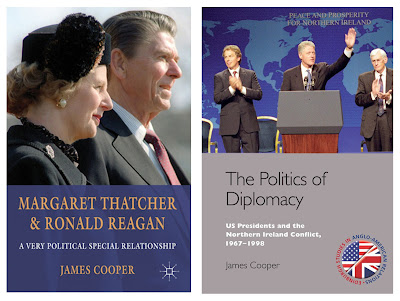 The first focused on Anglo-American policy transfer between the Reagan administration and the Thatcher government, debunking common myths about the similarities between Reaganism and Thatcherism (Margaret Thatcher and Ronald Reagan: A Very Political Special Relationship, Palgrave, 2012). The second examined the role of U.S. presidents in the Northern Ireland conflict and is a significant contribution to the emerging scholarship about American influence on the Anglo-Irish process and Northern Ireland ‘peace process’ (The Politics of Diplomacy: U.S. Presidents and the Northern Ireland Conflict, 1967-98, Edinburgh University Press, 2017).

Why did you not just choose to study the History of one country?
I do not believe that events and issues can be studied simply through the history of one country. The politics and policy making of countries do not occur in isolation from developments elsewhere and the writing of history should reflect this. Therefore, despite my primary focus being the history of the United States, my research considers America in a global context.

What are the highlights of doing your research?
My research has allowed me to visit plenty of interesting places and meet fascinating people. I conduct research in a variety of American, British and Irish archives, including numerous presidential libraries. My favourite presidential library is probably the Ronald Reagan Presidential Library (partially because it has the best canteen), although I would recommend that anyone with an interest in American history should try to visit any presidential library if they can! I was fortunate to be able to conduct over thirty interviews with key protagonists – including: Mr Paul Volcker, former chairman of the Federal Reserve Board; Lord (Geoffrey) Howe, former UK Foreign Secretary; Lord (Charles) Powell, leading adviser to Margaret Thatcher; Mr Edwin Meese, a leading figure in the Reagan administration; and, Lord (Neil) Kinnock, former Labour Party leader – and I am regularly able to consult the most recently available archival material. Researching in archives often leads to all sorts of surprises. I have read documents that detail the Reagan administration’s excitement about a visit by Michael Jackson to the White House and Bill Clinton’s offer to babysit Leo Blair, youngest son of Tony and Cherie, after his presidency ended in 2001.

Do you compare history to current affairs?
The subject matter of my research certainly lends itself to comparisons with current events in both Britain and the United States. I have blogged on ‘Cultural Thinking’ about the regularly asserted comparison between the Reagan-Thatcher relationship with the emergence and relationship of Donald Trump and Theresa May. In addition to making anecdotal comparisons in my teaching between history and the present, I have contributed to American and British news coverage about the politics in both countries.

What do people think about your research?
My research had led to very exciting opportunities. For instance, in 2012-13 I was the Fulbright-Robertson Visiting Professor of British History at Westminster College in Fulton, Missouri (where I also curated an exhibit, based on my research on Reagan and Thatcher, at the college’s National Winston Churchill Museum). In November 2014 I was interviewed about the Reagan-Thatcher relationship on the BBC News Channel. I was a Visiting Research Fellow at the Norwegian Nobel Institute in Oslo in May 2016. My books have been positively reviewed by my peers and I am a regular contributor to academic journals, collections of essays and conferences. Many people find it interesting that what I study is considered to be ‘History’ given that it happened in living memory – including my own!